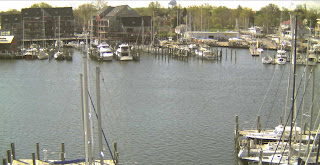 Had the first race of the season last last night.  A bit of rain and threatening clouds on the way out, but a nice steady breeze and clear skies the rest of the night.
Glen got caught in traffic, so we crossed the starting line 5 minutes after the gun went off.  :(
There was some confusion about the course among the fleet.  We crossed by ourselves and the RC told us "you guys have course A2".  Harry and J turned at A, doing course A1.  TC went out to D and turned, doing course A2.  We followed TC.
We crossed the finish at 8:01PM, which is 14 minutes before the time limit, but no one from AYC was there scoring boats and we show up as DNF on the score sheet.  >:(
I'll have to follow up on that.
The net is that I believe we came second, but we'll see if we can get that straightened out.
--Tim
Update:
Crew--
I think after a number of conversations and the novel action item of reading the sailing instructions in detail, I think LinGin took the wrong course.  As it turns out mark "A" is specified to be a "red cone", not a green cylinder.  We missed seeing the red cone and ended up doing the course that was designated for the big boats (A5).  Doh!  Next time we'll get it right.
I've written AYC to get us scored in fourth rather than DNF.
--Tim
Posted by Tim at 9:26 AM

Good to get the easy mistakes out early anyway.....right?