Last night's WNR saw lightening breeze out of the south and an "A1" course for the A30 fleet. We had a decent start and, watching the many fleets before us, headed left. Argo saw a little more pressure near the shore on the right side of the course and headed that direction almost immediately. Second2Nun was the only one that follow Argo.

By the top of the course, it was clear that going right was the way to go. Argo had a signficant lead on the the fleet and we were trading tacks with Second2Nun. We rounded in second, closely followed by Skybird and Second2Nun. Laughing Gull and Asylum came next.

The downwind leg saw the breeze get even lighter (floater conditions at times) and unfortuntately for us, the big boats caught up with us on the way back from their longer course. The RC properly finished the race at the red nun allow, I think, all classes to get a race in. Argo took first and we took second. The rest of the fleet looked very even coming in, but we didn't stick around long enough to see the actual order. They were moving at a snails pace.

It was a beautiful evening to be on the water and I think we all had fun. I know I did!
Posted by Tim at 6:23 AM No comments:

Email ThisBlogThis!Share to TwitterShare to FacebookShare to Pinterest
Labels: WNR

Glen posted a re-cap of the WNR I missed while I was in CA for business this week.  Catch it here:

We headed into Day 3 with high hopes.  Tied with Argo for first, we needed to beat them to take first.  For reasons we're not altogether clear on, LinGin is not as fast as Argo in lighter air.  We prayed for moderate breeze!  We did not get it.

We sailed the best we knew how but could never get the boatspeed we needed, and Argo was not about to give us the opportunity to get leverage.  In the end, we took second behind Argo with Windswept in third.

For about 30 minutes the RC waited to see if there would be enough wind for another race.  With little time before the awards ceremony and the Bay looking quite calm, they told us to all head back to shore.

Of course by the time we were in Whitehall Creek, there was a nice breeze blowing.  We'll get 'em next year!

Rachel Meinhold grabbed this cool shot of LinGin finishing the Wednesday Night Race under spinaker earlier this week from the AYC webcam.  Thanks, Rachel! 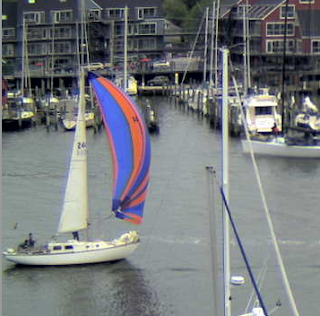 The second day of the NOOD started with light winds and a heavy ebb current.  The race committee got off three races in a building breeze.

The first race was remarkable in that the wind was barely strong enough to allow the boats to cross the starting line.  We got a bit lucky in that we stayed close to the line before the start.  However, at 2 minutes before our start, the wind died and we realized we might not make it over.  We did cross, but after 20 minutes of sailing we were maybe twenty boat lengths course-side of the line.

In the first race, Argo beat us.  They were clearly faster in those conditions; we had a sizable lead after the start and even when close to them we couldn't keep up.

For the second race there was a decent breeze and while the current wasn't as strong, it was still a factor.  We wanted to go west toward Hackett's Point to get out of the deeper water, but Argo went east and we decided we need to cover them.  Unfortunately, not only did Argo beat us out going right, but Laughing Gull went deep to the west and pulled ahead too.  We took a 3rd and Argo taking the gun.  That put a boat between us in the scoring--not good.

The final race found us with a good breeze.  Skybird fouled Argo at the start and gave us a bit of a lead.  At the windward mark, we had a very close bunch of boats: Laughing Gull, Windswept, Argo and us all rounded together.  Painfully, we were in fourth.

All day we had been doing a bear-away set and then gybing a short while after the set.  Argo had been doing gybe sets all day.  As we came around the mark, we were a foot or two behind Argo and in their haste to get the chute set, they rounded the mark wide, leaving a nice hole for me to nose into.  We were both on starboard, but for Argo to raise their chute, they need to gybe first.

Gybing onto port, Argo tried to cross us, but clearly couldn't and had to immediately gybe back.  It was a great moment, since they couldn't set the chute until we gybed or they slowed down enough to go behind us.  I wish I could say I saw that coming, but I didn't.  I think I'll remember next, though!

We got our chute up quickly and at the same time the pressure went up significantly.  We passed the others going downwind and charged around the leeward mark.  After a heavy air jaunt up to the windward mark, we quickly popped the chute and charged back toward the finish.

The chute ride was a wild one.  We had a tough set with a twist in the sail.  Brian did a great job getting it untwisted and we all worked together to keep it under control.  The adrenaline was pumping between the chaos of the spinaker and the excitement of taking the lead.  Pretty soon we rocketed across the finish line.

The great news for us was that Windswept successfully beat Argo, give us a boat between and tying the series 7 points to 7 points.  Tomorrow's race will determine the winner of the NOOD and the Maple Leaf Trophy.

The first day of the NOOD had a slow start.  Fog socked us in, followed by breeze, no breeze and massive shifts.  Finally, in the early afternoon the race committee felt the breeze was steady and stable enough to send us on a race.

This had to be the strangest start I've ever seen...I wish I had time to grab my camera.  We were the fifth class to start and by the time we started, the J30s were heading back downwind under spinaker.  Moments after the start our breeze shifted roughly 180 degrees, turning our upwind beat into a downwind leg.

Most of the Albergs quickly set our chutes and for about 5 minute we were heading straight toward the windward mark, and the J30s were under spinaker heading straight at us (and their downwind mark).  Very strange.

Ultimately, Argo took the lead and by the first mark, Windswept had us too.  For a bit on the downwind leg, we had Windswept, but by the rounding he had us again.

Heading back up to the windward mark for our second lap, we went right along with Argo and Laughing Gull.  Windswept decided to head left, but at the windward mark it was clear that the right had been significantly favored.

This leg was very frustrating as Laughing Gull came up from behind in a lane of pressure and simply drove over top of us.  Adding to the joy and excitement of the moment was Ray, who while trimming jib for us, kept blurting out, "Here comes Laughing Gull and boy are they fast".  After the third or fourth mention of the Gull's superior speed, I politely suggested he zip it.

Rounding the windward mark for the last time, we saw a window open up.  As Argo and Laughing Gull bore off to round, we caught up to them a bit.  The course has two marks that you have to round and as we followed them to round the second, they rounded tight and then wide, leaving a space for us to sneak inside.

Well, you don't have to give much of an invitation, and I took this one.  Garrett, Ray and Glen did a great job executing a quick gybe to get us a very nice angle on the mark.  We poured all of our focus on going as fast as we could for the rest of that leg.  When we reached the finish, we had a nice lead on the others and took the gun.

We had a great time in a hard fought race.  It was nice to see everyone out for the season and look forward to the next two days of racing.