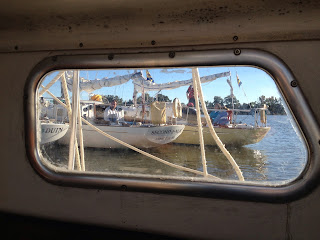 The race back from Queenstown was most notable for the groundings of Albergs trying to get out of the anchorage.  After a wonderful breakfast, the raft broke up and we headed for the start.

Skybird was aground with both sails up and she was aground HARD!  We tried for 10 minutes with no luck and left to get to the line before the start.  On our way, we say Argo, jib up and hard aground.  They let us know that the A30 start was postponed to allow the boats to get off the ground, so we set to work helping them.  In this endeavor we were successful.

Skybird had a work boat come to their rescue, although it took about 40 minutes to get them off!

We were over early for the start, but with quick crew work, we were able to round the race committee boat and not lose too much time.  The wind was ~15 kts out of the north and during the first reach we were able to pass Laughing Gull to leeward by coming right up behind her and then powering up by falling off quickly and busting through her bad air.  I was happy to see us make that maneuver work.  It's never easy!

After that it was all about chasing Argo.  We tried to split with them.  They covered.  We tried to get out of the current.  We found lots of headers.  We tried shaking the reef in our main.  No discernible progress in catching them.  Argh-O!

Slowly, the wind began to die as we prepared to cross the bay.  The waves were still big and the power boat wakes in the river were not helping us at all.  LinGin felt under powered and pushed around by the waves.  I hate that feeling.  We loosened things up.  We fell off to power up.  Nothing seemed to help.  We were really scratching our heads. 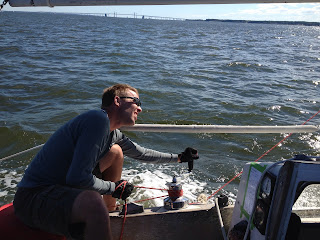 On the final reach across the bay, we saw Argo continue to make gains.  At one point the wind almost completely died and we realized we were in a hole.  Argo seemed to get smaller and the boats behind were definitely getting bigger!

Thankfully, the wind picked back up and we kept the boats behind at bay.  Argo took the gun.  We were second and I'm pretty sure Skybird was third.

Any day sailing is a good day and this was no exception.  Now we need to think about how we can do better in those conditions!
Posted by Tim at 10:35 PM 1 comment: 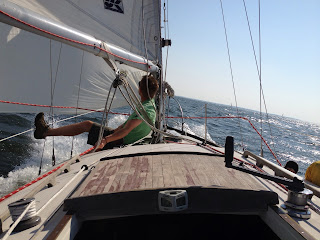 This past Saturday, we had the annual race to Queenstown.  The weather cooperated, blowing a fresh ~15 kts out of the south.  That was good news for those of us coming from the south--there's nothing worse than banging into big waves and a north wind for 2+ hours trying to get to Baltimore Light for the start.

Having done the Queenstown races for many years, I've found it usually be a fairly relaxing race.  Because the course takes us straight across the bay, it's often a long reach.  If the wind is coming from the right direction, the 13 mile race can have zero tacks!  (It's happened before; I was there.)   I think the race committee should have the option of giving us a mark for the race across that would give us at least one tacking leg.

Our start for this race was a little wacky.  Glen said, "the breeze is strong enough that we'd be okay with a Laser start."  He meant that it was windy enough that we could luff very near the start line, pull the sail in just before the gun and be up and going in short order.

I somehow managed to get us to the line a little early and pointed toward the race committee boat head to wind with about 30 seconds to go.  A small shift started us heading the wrong way--back away from the start!  I yelled to Glen to backwind the main, knowing full well that while that will cause a Laser to sail backward, it doesn't work very well on an A30.

Is a matter of a few seconds, we were relieved to see the boat push backward slightly and head toward the line.  Not the "Laser start" that Glen envisioned, but it worked for us!

From there we lead the group across the bay.  Since we were off the wind, we moved the jib cars forward until all the tell tales on the jib were breaking evenly.  We kept an eye behind--Windswept was less than 2 boat lengths back all the way to the first mark. 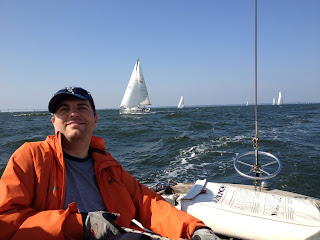 We rounded, wondering if we should have reefed the main; we were overpowered, but steady.  Not too long later it was clear that the setup worked.  We had distanced ourselves from the rest of the fleet.

The final leg was downwind and you better believe that Scott was itching to put the chute up.  We didn't really need it to protect our position.  However, we all like a good chute run, so we put it up.  After a fitful start with some rounding up, we got her under control and were charging to the finish.

We soon realized that we had a shot of getting line honors (being the first boat in the whole race to finish) with a PHRF boat gaining quickly on us.  We hunkered down and sailed our fastest.  All of us were quite sure we got the line honors, but the race committee at the awards ceremony suggested the PHRF boat got us by 3".  Bah humbug!  We did it.  I saw it.  :)

It was a gorgeous evening on the bay.  I actually had the chance to join the band and play some guitar at the party.  We tested out LinGin's new grill with good results: steak + sweet potatoes = happy crew. 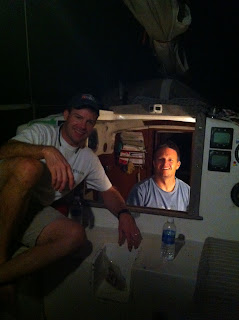 From the Alberg 30 Racing Blog, we introduce, Grace, the roving Wednesday Night Race reporter on the scene of an exciting situation... 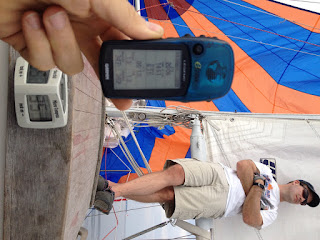 The Hammond Memorial Race back from Oxford started promisingly enough.  We had a spinnaker start and built a nice lead on the fleet.  As has been known to happen, the wind died on the last leg of the course; the 8.2 nm (long) leg of the course.

The time limit is 7 hours and we spend a few agonizing hours doing everything we could think of to go faster, while anxiously watching the GPS ETA.  Some times we were going to finish 3 hours too late and at other times (when the wind was up) we were going to make it by 10 minutes.

Ultimately, it was not meant to be.  We finished in 7 hours and 6 minutes.  Very, very disappointing.

I plan to petition TAYC to give us another hour to finish.  This distance is just outside the safe range that an A30 can do in 7 hours! 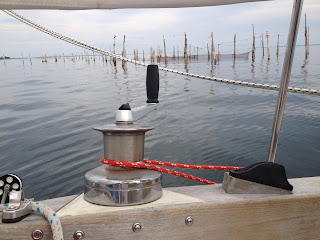 LinGin Comes From Behind in the Oxford Race 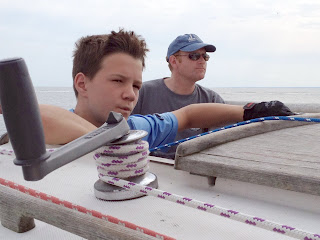 The weather for the 58th annual race to Oxford, MD looked great for the race down.  Sunny skies and 15 kts out of the north.  LinGin just had her bottom done for the first time in 3 years, so she was ready and so was the crew.

I jumped under LinGin to wipe down the bottom.  It is so smooth now that a washcloth did the job.  Beautiful!  No more sea nettles now, so I was a happy camper.  The crew arrived and stowed the provisions, fueled LinGin up and we were ready to go.

However, LinGin's engine was not ready to go.  After many attempts, we decided to steal the battery from the power boat to see if that would help...and sure enough, she started right up.  Unfortunately, it looked like we'd be 10 minutes late to the start!

Going into the race, we were behind Argo in the High Point standings.  Argo won the NOODs and the Miles River race.  Oxford is a long race at 29 nm, and therefore gets "bonus points" in the scoring.  We needed to beat Argo in this race if we wanted a shot at High Point!

Fortunately, once LinGin's engine got going, she was ready to do some work.  We got to the line just in time for the start, but were very frustrated by our inability to locate the check in boat.  If we didn't check in, it was a 20% penalty.  Ouch!

We were first across the line and started very near the boat end so we could yell at the race committee.  Maybe we could check in with them?  No luck.  They did point us to the little check in boat 300 yards south--and downwind--of R2.  This was not the "300 yards NE of R2" that was stated in the race particulars.

To avoid the 20% penalty, instead of heading downwind toward the first mark, we reached across the line to the check-in boat and checked in.  We immediately turned south and put up the spinnaker, which in 20+ kt gusts and 2-3 ft rolling seas can be quite exciting.

Peaches overheard some of our discussion about the chute and asked, "what's a death roll."  We did our best to explain it, but said, "trust us, you'll know it if it happens."  Not more than 5 minutes later, we had a serious knock-down that, had we not responded quickly would have developed into a serious death roll.  Peaches, laughing, said, "I like it!"  He's nuts.  We took down the chute.

The first leg is 11 nm and running wing-in-wing, we saw speeds over the ground in excess of 10 kts.  Sweet!  Windswept was ahead of us, as was Laughing Gull and Skybird.  We couldn't find Argo anywhere, but with the rush to the start and the crazy check-in, we thought we might have missed them. 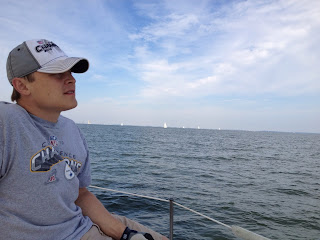 Scott had been disappointed in our decision to forgo the spinnaker, so when we finally decided to put it back up, he was fired up!  This time the wind had steadied out a bit and was manageable.  We had a few tricky moments, but with hard work we were able to keep the boat under control.

By the first mark, Scott had helped us get ahead of Skybird and Laughing Gull.  Windswept was a good bit ahead of us and didn't fly their chute.  While we made some distance up with the spinnaker, it was going to take more to catch them.

The next leg was a reach and while we put more distance on the boats behind, we couldn't get any closer to Windswept.  The final leg was a beat to the finish line and to maximize our chances of getting past Windswept, we decided to split with them as much as possible.

First, we decided to reef the main.  It appeared that Windswept was going to keep full sails up and the wind was heavy enough that we thought the reef could help keep us flat going upwind.  Secondly, we watch Windswept stay on port tack coming around the mark to the last leg, so we tacked to split with her.

Ultimately, the splitting paid off.  We found out later that Windswept had trouble being overpowered and one tack involved a tangled jib sheet.  A few tacks up the creek and we were rewarded for our persistence with the gun.

We haven't run the numbers yet, but we're pretty sure this puts us in the lead for High Point. 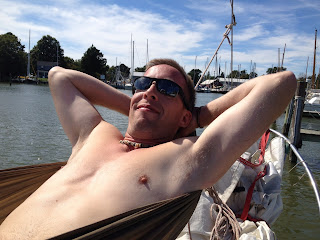 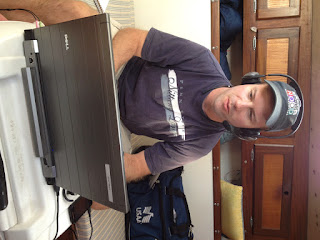