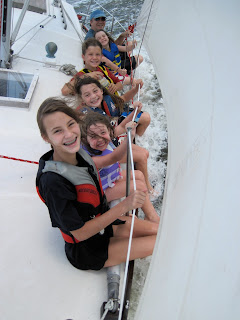 We had a family reunion a couple weekends ago and my brother, Andy, took this great shot of the kids having fun on LinGin. They all had a great time and I love the looks on their faces.
Alberg sailing is GREAT!
p.s. Andy noted that you can tell who the regular sailor is by looking at who is holding on... :)
Posted by Tim at 4:57 PM No comments: 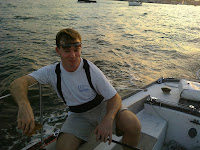 One thing I think we need to do on LinGin is to trade spots. Having me run tactics, or help with tacking brings new ideas and views of the boat. Letting others try out new positions helps us learn not only new jobs, but also gives us a new appreciation how the jobs fit together. It also creates backups for when people are out.
Last night we switched things up and Glen drove. Tim P. and Jake did a lot of learning--they're pretty new to the boat. I did some tactics and David continued to handle the main. Scott enjoyed every second of his foredeck role.
We had a less than stellar start, but made out pretty well going up the windward leg. In second and chasing down Laughing Gull on the downwind leg, Glen found a huge hole at the red nun as we rounded next to them and drove over them on the rounding. (Wide then tight really works!)
From there we were on pins and needles coming into the harbor in light air. Everyone worked together to keep LinGin going fast and we crossed in first.
Nice job, crew! Great driving, Glen.
Posted by Tim at 4:48 PM No comments: 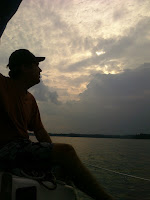 Well, we knew it couldn't last forever. LinGin's WNR streak ended on Wednesday, August 12th, as we came in fourth. Nine guns in a row ain't bad, though!
We had a good race and lead all the way to the harbor. We missed Scott as we needed some quick spinnaker work coming into the harbor and while Garrett did a great job (zero errors!) if we had been able to get it done more quickly, we might have be able to hold off the competition.
While we were navigating the moored boats, the wind died and Argo, Second-2-Nun and L'Esprit snuck in along the Chart House side of the course. We only beat out Laughing Gull by about a third of a boat length too!
Brian Palmer and L'Esprit took the gun. Great job guys! We look forward to continuing to tangle with you.
Posted by Tim at 4:32 PM No comments: