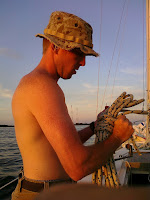 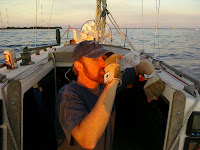 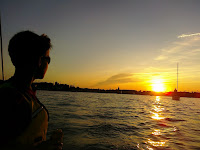 Finally! After many races canceled due to a lack of breeze, we had a race.
Running late (a VERY rare occurrence on LinGin--I wish!), we made a mad dash to the start. We ran aground on Greenbury Point. Dang! I didn't feel so bad when I noticed that the depth sounder read "20 ft." while we were solidly on the bottom. Luckily we were quickly on and quickly off. Didn't even have to jump in.
We passed the pin end of the starting line with 4 minutes left to our start. Most boats preferred the boat end, but with the wind out of the north and the angle to the first mark just barely allowing a spinnaker set, I liked the pin end. We started on the line, with speed, in clear air and quickly set the chute.
This proved to be the blast ahead that we needed, rounding the first mark well in first. We then beat out to a mark about halfway between Greenbury and Hacketts Point. It was a lift heading out and though a persistent shift would suggest tacking, we kept with it; it seemed to be land induced. This too proved to be key as we rounded the second mark even further ahead.
A very nice spinnaker run back in, along with a nice visit by C.B. Currier passing in his Melges 24, made for an enjoyable race. The topper was coming into the harbor. We hugged the Naval Academy rock wall and sure enough found Crystal Whaley and the kids. We had some very serious cheering for LinGin (we felt like rock stars) and Scott seemed to sail the spinnaker with a bit more authority (if that is possible) as we passed.
Crystal and the kids have made a tradition of watching LinGin. She wrote a really cool post about it complete with pictures on her blog, Life at the Circus.
On the ride back we were treated to a phenomenal sunset! Beautiful.
Posted by Tim at 12:17 PM No comments: