We LOVE Brian Palmer. He's a great guy and all that, but he's also a camera geek! That means we have cool shots from the top of the mast. We have cool shots like the famed crab riding a jellyfish. (We're still not sure how he got that shot.)

Last Wednesday, Brian taped a video camera to the end of our boom and recorded the race. Sped up 1,200 times faster than normal it's a fascinating watch.

One cool thing to notice is that after the start, David takes the helm. He's done that a bunch this summer and I couldn't be prouder of him! Here was my brother, Andy's, comment:

Also, great to see Dave driving most of the time... although Tim seems bored - not sure you guys need him anymore?

Why We Do Wednesday Night Races

There are lots of great things about doing the WNR. We build some great relationships and have a lot of laughs. We love being competitive and challenging ourselves to do our best.

However, the reason I do the WNR is to see my kids having the time of their lives. An example:

LinGin does some shark fishing :)

Those kids were having the time of their lives on the way home from the race. It started with the three of them sitting on the boom going downwind on the way home. David decided it would be cool to jump off the boom into the water and grab the mainsheet in the process. It worked like a charm and the girls followed.

The rest of us on the crew couldn't stop laughing. That was such a blast and that's why I do WNR and always will!
Posted by Tim at 7:32 PM No comments:

After a mad-dash from Baltimore to Annapolis, I jumped aboard LinGin at 1743 hrs., much later than we usually head out. We had Tim Peek, Mackenzie, David, Pat (a friend from work) and Pat's son, Zach. It was hot and sticky with a south wind around 8-10 kts. On the way out we saw storms in the distance, but felt they were moving in the right direction (away from us!) and decided to keep heading for the line.
Mackenzie took the helm on the way out and we found the bottom at Greenbury Point. I can't fault her though. First of all, George Washington himself wrote about going aground at Greenbury Point, and second of all our depth meter read 6.6 ft. when we hit. Man, I hate those NavMan instruments...they are junk. All ended well; we were off in no time and steaming toward the line.
I drove for the start and amazingly we we had about 6 minutes to the start when we arrived at the line. Sweet! We put in a tack or two and at the final run to the line were able to keep Harry from barging and Jonathan was far enough down the line that couldn't pinch us out. We had the best start we've had all year. Sweet!
After a good sail up to mark A, I gave David the helm so I could prep the spinnaker. David had sailed a good bit of the way home from St. Michaels the weekend before and I had been impressed with his ability to keep her going upwind. We rounded mark D (we had course A2) with a healthy lead.
As we came downwind, we thought about raising the chute, but it started to rain and the wind picked up considerably. With a good lead, there wasn't and good reason to raise it, so we stuck with white sails. Everyone agreed the Tim Peek's incessant cackling and yelling, "bring it on Mother Nature" while standing on the bow in the rain probably caused the storm to subside prematurely.
David had a good rounding at the red nun, but as we sailed upwind to the green can, his tactician (read me), sailed him into a huge header while Harry split tacks (he tactician didn't tell him to cover) and made up a lot of ground. However, David did a great job of threading the boats in the harbor as well as avoiding the Etchells class and the absentminded boats that had finished motoring willy-nilly through our course.
We took the gun and had a very nice trip back to Mimi's, listening to lots of police officer stories from Mr. Peek.
Looking at the scores this morning, it looks like LinGin edge out Second-2-Nun (Harry) in a tie to win Series 1 of the 2011 WNR. Sweet!
Posted by Tim at 7:24 AM No comments:

Great post from Glen our Miles River Race success:
http://www.glenbecker.com/2011/05/a-perfect-day-2011-annapolis-to-miles-river-race/
Thanks for all you do, Glen. We all love spending time with you and Emily!
Posted by Tim at 7:17 AM No comments:

Email ThisBlogThis!Share to TwitterShare to FacebookShare to Pinterest
Labels: race

Pretty cool!
http://www.hometownannapolis.com/news/sal/2011/04/27-56/NOOD-regatta-to-feature-championship-contests.html
Posted by Tim at 11:50 PM No comments:

It was just like old times today. Glen, Brian, Scott and I took LinGin out on a gorgeous day and had a fantastic time. There were four races in winds ranging from 10 to 25 kts. Scott had SEVEN, count them, SEVEN, sets, douses and resets today. Brian and Scott had dozens of tacks and Glen had the pleasure of scrambling all over the boat. Needless to say at the end of the day we were exhausted!
J Bergquist and Calliope were on fire today! Finishing 1-1-5-1, J was fast, chose the right side of the course reliably and had some excellent crew work. We were solid in our chase after J: 2-2-1-2. We're only leading by one point, but there are four more races scheduled so it will be exciting to see how it turns out.
We seemed to pick the wrong side of the course and I had a few terrible starts. I also misjudged a few port-starboard crossings, costing us some speed and distance with abrupt tacks. We had excellent spinnaker work with very few mistakes. By the end of the racing we seemed to have knocked the rust off and were working pretty well.
Tomorrow David and Mackenzie join the crew. We're looking forward to the help!
Posted by Tim at 10:54 PM No comments:

An oldie, but a goodie!

This video was made by Brian Palmer back in 2005 when we had an epic race back from Oxford. Watch the whole thing and you'll be "in" on a LinGin crew joke about Scott and sandwiches. 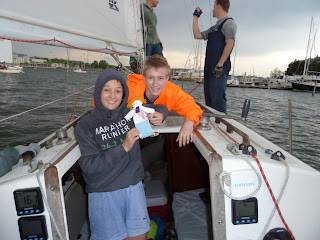 The first Wednesday Night Race of 2011 saw high winds as a storm edged by to the west of the course. We had a nice start; AYC has given the Alberg class its own start this year, so the line is not crowded. The A1 course was quick and the wind was high enough that despite all of Garrett's work setting up the chute, we couldn't fly it.
Calliope passed us going into the harbor to take the lead and looked poised to take 1st right at the finish. With the wind coming out of the Spa Creek bridge, we pinched to stay above the moored boats. Calliope stayed with full power, sailing low and fast, but into the moored boats. When she had to tack onto starboard at the docks, we ducked her, but the extra tack she had to take to get to the finish line cost her the race.
Nice work crew!
Once back at the dock, Nick used his grinder to remove the broken turning block that's been stuck on the boat for a year. Check out this night picture. 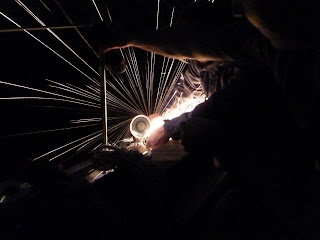