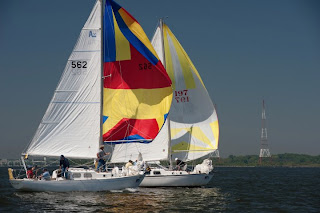 Photo Credit: Brian Palmer
The 2010 Annapolis NOOD (National Offshore One Design) regatta was fantastic this year. We had eight boats registered for the event and seven out on the line for every race. There were the usual faces: Windswept, Argo, Laughing Gull, Second-2-Nun and LinGin; as well as some new ones: Skybird (with a new skipper!) and Backfin. We once again had the Spring Rendezvous at Lake Ogleton during the same weekend as the NOOD. It was great to visit with everyone and swap sea stories about the racing during the rendezvous.
One thing I love is learning about the boats that come out to race with us that I don't know. Backfin was skippered by John Finley, who last raced well over 10 years ago. I have it on good account that John is the second longest original owner of an Alberg on the Bay--he purchased his boat six weeks after Bruce Breiding in 1965. That means that John has owned Backfin for 45 years! His sails are vintage; they were signed by Bert Jabin (who was on the rules committee back in the day). John had his daughter out racing with him and he hopes to make some of the other races this year as well. Welcome back to the racing scene, John! (By the way, I still see Bruce Breiding out sailing Phantom, #113, out on Whitehall Bay whenever the breeze is up.)
One neat thing that happened in this year's NOOD is that one of the editors of Sailing World, Mike Lovett, crewed on LinGin for day one of the NOOD. We really enjoyed having Mike along; he was great crew and we learned quite a bit about the sailing media world. (Did you know that Sailing World magazine is generated each month by only 3 full time editors?) He wrote a nice piece about involving kids in sailboat racing. You can read it at http://ow.ly/1MlVo. (You'll need to scroll down about to the April 30 entry, "Saving Sailing, One Kid at a Time".)
The first thing I can say about the NOOD is that the weather was perfect this year. Beautiful sunny days with good breeze. It was ideal. The race committee did a great job of setting the courses, which were all windward-leeward, about a mile from top to bottom and usually two laps. That doesn't necessarily sound crazy until you consider that if you were doing foredeck on Friday when we had four races, that meant you packed, set, doused and reset the spinnaker eight times during one day of racing! I don't know about the others, but my foredeckman's wife, Krista McWilliams, said that Garrett was so tired Friday night that he couldn't talk. The good news is that I'm pretty sure that he had a smile on his face while he slept that night.
As for the racing, T.C. Williams drove Argo to 3 bullets on Friday and never looked back. He won the Maple Leaf Trophy (the Association's trophy for the NOOD) for the second year in a row. The next four places, however, were tightly contested. I don't know the actual times of the finishes, but we had numerous races where three or four Albergs finished within a few boat lengths of each other. The leaders at the top of the first mark were often racing to catch up again the second time around. It was nail biting!
Lanny Helms, our Racing Commodore, had a excellent series proving that his new spinnaker not only looks good, but can make Windswept fly downwind. New skipper and the new owner of Skybird, Mike Nikolich, showed that he'll be one to watch out for this season. He knows how to make that boat go. Laughing Gull put us on notice that they are out for silver this year. Jonathan Adams got the gun on the last race of the regatta, nosing out Argo in the last few seconds a VERY hard fought competition.
I didn't hear of any major mechanical failures during the racing and I don't think there was a single strategy that won the day out on the course. Some of our crews were a little rusty coming out of the off season. I, for one, could use some practice starting! I think I speak for everyone when I say that it was some of the best racing we've had. Beautiful boats, closely matched in tightly contested one-design racing. Love it!
The results can be found here. Brian Palmer put some great photos he took of the regatta on his Facebook page. (I think you need to friend him to see them.) 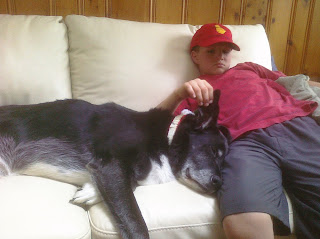 Even David was whooped after a full day of the NOODs.
Posted by Tim at 8:28 PM No comments: