Wednesday Night Races: No. 7...Not again!

Alas, we thought this one would be different, but it was not to be. About 30 minutes after a very light air start the race committee decided the wind wasn't going to show up and called the race. There was a storm headed our way too, so that might have factored in.
Three canceled in a row? That's got to be a record.
Posted by Tim at 3:45 PM No comments: 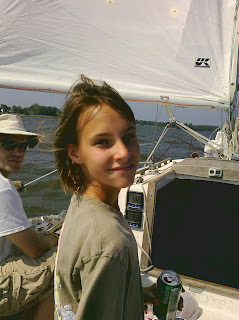 The Osius race this past weekend was a fun time. Darcy, Garrett, Glen and I had our hands full doing two races that each required two laps around a 1 mile course.
The wind was out of the south and strengthen throughout the day, starting around 5 kts and building to somewhere around 12 kts. There was the standard weekend powerboat chop too. :(
Both races we had good starts and the crew work was on target. Garrett really earned his keep doing all that spinnaker work. He was either setting up, flying, taking down or packing the chute throughout each race. Lots of sweat and hard work. Being a relative newcomer to the foredeck he did an admirable job: we had zero errors and really only one set that took a little longer than we would have liked.
Unfortunately our boat speed was not up to Argo's. Each race Argo pulled away and try as we might, there was no catching her. I've put together a spreadsheet to start tracking our settings in various conditions. Hopefully over time we'll figure some things out.
One thing we didn't do, but that could have helped was move the traveler up to introduce twist in the main to help power us through the waves.
The second race was a bit more exciting because Lanny (Windswept) passed us on the last upwind leg and we had to catch him under spinnaker to get second. It was touch and go for a bit, but we rolled him to windward and once far enough ahead, gybed to get clear ahead of him and headed for the finish line.
Great work everyone, and thanks to Darcy for being a trooper and playing the main in the hot sun for hours. The next weekend race isn't until the fall, so it's WNRs until then.
Posted by Tim at 3:35 PM No comments:

Last night the WNR was canceled again. (I hope this isn't a trend.) This time we were short on wind and there was a thunderstorm approaching.

We headed back and did some more boat work which was fun. Thanks to everyone for helping out. Special thanks to Tim Peek, for sticking around and doing boat work on his first night out on LinGin!

According to my records, that seals LinGin's 1st for the first WNR Series of 2009! (The WNRs are grouped into three series each year.) Very cool. Thanks to everyone for all your hard work. I've had a blast.

LinGin Shows Up in SpinSheet 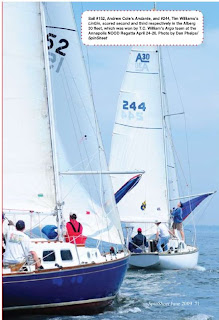 Ray Meyer pointed us to a great picture of LinGin in the June issue of SpinSheet.

Looking good!
Posted by Tim at 9:35 AM No comments: