David joined us on this race. It was his first ever Alberg race. The first of many more to come!

The wind was light and out of the south, but it enough to get us going and keep us going. We had a good start and while Towney headed south to the shore (his standard move), we stuck to the left and found a bit more wind. Converging on the windward mark, we were on starboard, and thought we hoped for a nice lift, we needed to tack out to make the layline. Towney crossed behind us on port tack--quite to my surprise, as during the upwind leg we were quite far apart, and I had the feeling he was actually ahead.

I decided when we crossed him that we should take the opportunity to tack out, while we had a bit of separation. Towney tacked back to starboard to make the mark, and with the light air, I knew we either had to tack inside of him and hope to accelerate quickly enough to keep from being rolled, or duck him and be squarely behind him, hoping to make up time on the next leg. In addition, if we tacked inside, we had to hope that Towney overstood the layline enough that we could make the mark.

So, we quickly tacked inside of him, and "lee-bowed" him. This means we tacked right inside of him, such that we ended up slightly to leeward of him and right on his bow. (See the picture below. LinGin is white, and Skybird is crab fat yellow.) 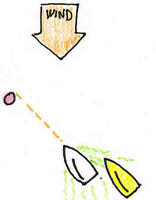 The green marks show what happens to the wind around a boat. There is not only a turbulence to leeward, but also to windward. The turbulence is much bigger to leeward, and that's why we stay out of other boats' wind shadow. However, the turbulence can be just as devastating to windward. In this case, Towney was already pinching to ensure he could get around the mark, so he couldn't come up any further. He couldn't come down to go below us; he had to make the mark. So we stuck it to him, and it worked this time. (It's not often you get to do something like this to Towney!)

As an aside, there are times when we will be on starboard tack, and a port-tacked boat will be converging on us. There may be times when we duck the port tacker and tell them to cross. This is because it is better to have them cross then to lee-bow us. This can be especially if the port tacker is not a seasoned sailor, since they may think they can't cross and inadvertently lee-bow us.

Once we got around that mark, we were in fat city. Scott flew an excellent downwind leg, and even coming into the harbor we had good speed and carried the victory!