It looked like it would be a light air night according to the weather reports, and on the way out we weren't sure. The race committee wasn't sure either and gave us easily the shortest course we've ever had.

A spinnaker start, we chose to start toward the pin end of the line while everyone else duked it out at the boat end. The boat end was favored, but we felt the better angle on the wind would give us the extra speed we needed to beat them to the first mark. 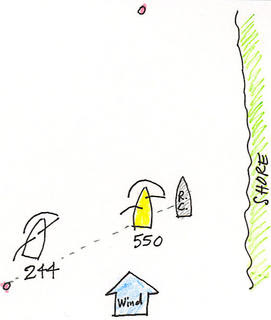 As it turned out, there was a bit of a thermal breeze near the shore that gave 550 and the rest a bit of a head start on us, but in the end our bet paid off. The angle gave us speed and we beat them around the mark.

While 550 was able to get their nose inside us on the rounding due to a large group of boats going around all at once, (there was no room for "wide, then tight") we exhibited good boat speed, and bearing off a bit took the solid lead.

There is some disagreement among the crew about our next move. Heading up wind to the red nun, we decided to tack and stay left. My thinking was to stay in clear air and to have an inside position at the mark. Towney, however, decided to go right. This gave him the ability to get outside of all of the big boats coming into the mark, where as we had to stay inside of them. I think we should have stuck to the age old advice to cover them while you're ahead. Certainly when we have better boat speed.

Once around the nun, it was a reach into the finish and while we did a great job of catching up, we finish about a boat length behind at the end in second.

The crew did a great job--especially Scott in flying the chute to the first mark--and I look forward to our next shot at Towney!

Is the color really called "Crab Fat Yellow", or is that someone's joke?