With new batteries, a new hatch cover, new instruments up and mounted, and our wealth of experience from last year's win on our way to Solomons, the crew of LinGin set off Friday evening, looking forward to the adventure that lay ahead. I felt like we got off to a pretty good start; we weren't late, and other than Brian making the revelation that Glen had forgotten to bring the power inverter to power the laptop (Doh!) we seemed to have what we needed.

The forecast was lousy: HOT, light air out of the south, and thunderstorms. (Did I mention HOT?) We had a fair amount of discussion about the effect of the current on the race, and how that should play into our plans. "Current is king," I had said before the race. Along the lines of "don't forget stuff", I told everyone to print out the race particulars and all the current info. Well, that happened and we had plenty of data.

Our start was great. Close-hauled on starboard tack with clear air, Glen had sighted the line so we were about 1 1/2 boat lengths closer to the line than anyone else. With about 6 kts of breeze we tacked out of the Severn and made it around Tolly Point leading the Albergs.

As we came upon Thomas Point Light, the sun was long gone and darkness set in. At that point we knew 57 was behind by roughly 10 to 15 boat lengths, with 247 not much further back. The breeze began to falter at this point, and I worried that we were not doing a very good job of keeping the boat going. Night racing is hard in part because all of your visual references are obscured; many times you may think things are going well, when in fact, if you could turn on the lights, you'd see how poorly you were doing.

Ring, ring! At 2330, Andréa called. "There are HUGE thunderstorms up here in Annapolis, are you guys okay?" We were fine, and by God's grace, we had been watching the lightning north of us and south of us, but hadn't even felt a drop of rain! As it turned out, we never hit a storm throughout the whole race.

As Brian and Scott worked to chart a course for us, we decided the western shore would be the best route to take. Trying to time your position, you want to be in deep water when the current is with you, and shallow when it is against you. However, at roughly 0200, Glen pulled out the current data he had printed out, and guess what. It completely conflicted with what Scott and Brian had printed out. On the boat, the only way to really know what the current is doing is to pass something that is fixed in the water (e.g. a crab pot, a navigation mark, etc.) and look to see how the water is flowing against it. (If we were confident we had the knotmeter tuned properly, we could have compared our speed through the water--from the knotmeter--to our speed over the ground--from the GPS; but we're not very confident in our knotmeter.)

With that disheartening information, we plowed ahead with our westerly strategy, feeling a bit less confident. At night you can't tell who is who, so while you can see the lights of other boats, and at time pass or are passed by other boats, you really don't have much of an idea as to where you stand until the sun comes up. We were a bit concerned because we didn't see many lights around...at all.

As the sun rose, we didn't see any Albergs. The wind completely died around 0600 and I awoke from a nap to find Brian in the bosuns chair hanging from the boom. Something about getting the sail shape right for light air? 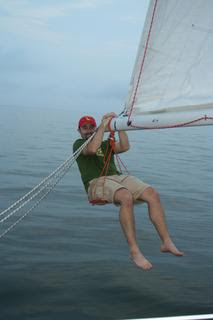 Note the heavy breeze on the water.
After Brian came in, Scott was sure the wind (what wind?!) was coming from the north, so with some prodding, we set the spinnaker. And guess what? The breeze came up almost immediately. It was out of the south, so down the spinnaker came.

We located 227 behind us a short while later, and sadly recognized 57 ahead of us as they rounded mark 76. Brian made us some great omlettes which tasted really great after staying up all night. He double the water for the pancakes, and I took over for him to cook them. Two lessons learned:

I learn new stuff every race, I tell you.

At that point it was a foot race to the finish line. The only real question left was whether Argo (247) was way ahead, or way behind. We flew the spinnaker across the finish line about 10 boat lengths behind 57, and a half mile ahead of 227. We were then informed that 247 had finished two hours earlier!

When we caught up with T.C., Argo's skipper, he said his whole tactic was to ignore the current and take the rhumb line (the most direct course) down the bay. So much for "current is king". Here's what our course looked like. The rhumb line is in purple and our course is the dotted, zig-zag line. (Except for the line at mark 76...that's what you get when you change the batteries on the GPS.)

So, a third for Solomons this year. Next year, maybe we'll go with Argo's strategy. Maybe we'll buy some real current charts? Who knows, but whatever we do, I'm sure it will be a blast!

Everyone did a great job, and it was a pleasure to race with you! Thank you wives, for sharing some precious weekend hours to allow us to do this crazy thing called sailboat racing. You are the best.

p.s. Glen and I dropped Brian and Scott off at Solomons and took off for home almost immediately. After a short fit of worry due to our inability to find the coffee we pack, we found it and we're quaffing some of the strongest coffee I've ever dared. With the southerly still prevailing, we put up the spinnaker and until we hit a lull before a storm about 5 miles south of Thomas point, flew the thing all the way home. Again, while we saw a lot of lightning, other than some heave rain off Tolly Point, we had a dry--but VERY HOT--ride home. Thanks, Glen!
Posted by Tim at 8:14 AM

Looking at our bread-crumb track on the chart, just above the C in Chesapeake, you can see where bleary eyed Scott and I decided it was a good time to tack to avoid a blinking yellow light that we though might mark a fish trap just ahead that didn't appear on our charts. Turns out it was on land several miles away!

No, I took the breadcrumb track in my GPS and uploaded it to Garmin's MapSource software. I'm using the BlueChart maps to get vector based charts, but when zoomed out at a level to see the whole route, you don't see much detail other than the route and tracks.

I was interested in SeaClear because I didn't think Mapsource would allow real time data from the GPS with the vector charts, but I was fooling around with it some more and it seems it does do both. This would be better than SeaClear for a few reasons:

-I can zoom to a comfortable level and the chart is as detailed as possible for that level.

-I can get depth anywhere I place the mouse.

-I can right click on a bouy or object and get more info than you can print on a paper chart.

-SeaClear stitches together multiple charts to cover larger areas. For example, the Solomons races was I think 3 or 4 charts. When you are on one chart, it's a pain to view what's beyond the border of the chart, and you can't easily scroll to see long legs, like the 38 mile strech from Thomas Point to R76. This makes it tougher to see the best route to follow.

I'm sure SeaClear has it's advantages, but I don't know it well enough to know what they are.