Oldfriendss made this race all the more fun. Steve and Kirsten Brown came along, and other than a wet ride over due to a strong southerly, appeared to enjoy themselves a great deal.

Towney was out this week, as most of his crew was on an Alberg cruise.

With a poor start, we wound up in the back of the pack coming off the line in a good strong breeze. It was good to have extra crew along to help hold down the rail. Argo (247) was in front of us and a bit to windward at the start. We bore off to get power and speed to hopefully move by him to leeward. It looked like this strategy would work, until Argo came down and covered us. It was a good tactical move on his part, because we couldn't get behind him at that point (we were too close to passing him), and we couldn't bring him up (we were the overtaking boat).

We had the same course as the previous two weeks, and with the wind from the south, it was a straight shot out to the channel mark, then we fell off to head north to the first buoy. Argo stayed high at this point, and we took the rhumb line. However, at the mark Argo had an inside overlap, so we had to give him room. Here's where we made some errors.

In the picture, LinGin is in red and Argo is white. Our strategy coming around the mark called for us to tack immediately after the rounding. It was the longer tack, and as it turned out, you could make the mark as soon as you rounded if you tacked. What we hadn't considered was, what if Argo didn't tack! So, around we came, all ready to tack and Argo didn't. We had the snatch block on during the leg, and had forgotten to take it off, so when we tried to stay on starboard tack, we couldn't get the sail in. We sat in Argo's bad air until he tacked and we were able to come over and head for the mark. We were way behind before we got things back on track.

Now it would be a sad story, if it weren't for some excellent work by Scott on the spinnaker, and some very odd maneuvering by Argo. We took them on that leg, mainly by simply sailing the rhumb line, while they stayed very high. (Perhaps they didn't see the mark?) Once around Scott had a great set, and he simply locked Argo out of the rest of the race by the distance he put on them.

Entering into the harbor, we took the gun greatly enjoying the win. Andréa and I jumped off with Steve and Kirsten for dinner. (We can now recommend the Rockfish for dinner!)

The crew went back through a very fierce looking thunderstorm that somehow they completely avoided. You can see how wild it looked from a couple of shots Brian snapped. 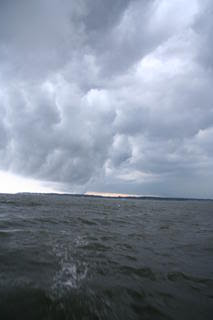 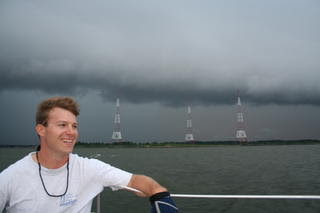 Wow, posted at 4:07am??? I hope that server is on west coat time! Thanks for the great recap, and the illustrations to boot :)

Cool illustration - did you draw that and scan it in? Do you have some kind of cool software program that lets you easily draw up boat positioning and mark roundings?

That's a hand-drawn sailing sketch. Sweet, non? Penned it, scanned it and uploaded it.