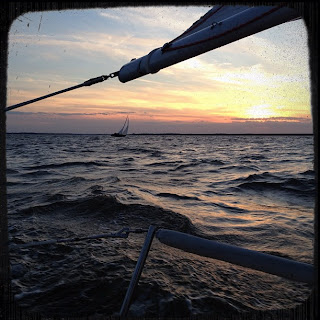 Glen, Scott and I had a great time racing this weekend.  Scott was aboard for the first time in a long time due to moving across town and becoming a landlord.  It was an important race for us; Argo beat us in the NOOD and to St. Mikes.  We were feeling the heat in the High Point standings!

The wind was a nice 5+ kts out of the NE for the start at Baltimore Light.  Scott and Glen did a great job of getting the spinnaker up quickly and jumping us to the head of the pack.  Argo wasn't far behind and we were happy to see some maneuvering among Laughing Gull, Windswept, Skybird and Argo behind us.

At some point, Argo started pointing further south than the rest of the fleet.  We wondered if he hadn't seen the note that the course would be changed to give the boats that draw 9 ft. a mark with deeper water than Sandy Point Light.  The new course was posted on the committee boat.  Did they miss it?

At the first mark, we lead the A30 fleet.  Argo rounded 11 minutes after us.  Frankly, we were disappointed that it wasn't going to be a more competitive race.  However, we did remind ourselves that we were only finished about 7 miles of a 38 mile course.

During the next leg the wind completely died.  It was fitful death, slowly decaying, coming back lightly and then a final glassiness.  We looked far behind and Argo and Laughing Gull were literally pointing 180 degrees from each other; both orthogonal to the course to the mark.  We wondered if the course would be shortened. 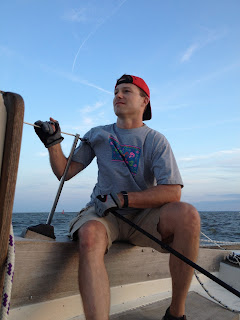 Argo sail/drifted toward the eastern shore during this bobbing period and we did a pretty good job of staying toward the rhumb line in the middle of the bay.  We felt good about this.  I was uncomfortable when Glen pointed out what appeared to be a wind line out to the east.  I was flabbergasted when, while our knotmeter read 0.0 kts., Argo, off in the distance, was throwing off a bow wake like she was under full power.


Slowly...waaaay too slowly, the wind line came to us.  As we converged with Argo at the next mark it was clear that Argo was ahead by at least 3 boat lengths.  Curses!


At this point we definitely got our wish for a competitive race!  With the wind up to 15 kts. and spinnakers up, Scott was loving it.  Glen and I did our best to keep the pole adjusted and help trim.  It was interesting to have 7 miles to work on covering Argo from behind.   I've always found it difficult to know where our wind shadow is.  The true wind + apparent make it tricky to predict.


We figured out the wind shadow and with Glen urging Scott, "Be agressive Scott.  Now is the time to be aggressive," we found ourselves catching Argo.  At the next mark we were the inside boat about 1/2 boat length ahead.


I'm not sure how we got the spinnaker down in that much wind, while bringing in the jib and the main, but we did.  (Having seasoned crew is such a luxury; I highly recommend getting some.)  That rounding gave us the headway we needed and we scooted ahead.


Usually the wind on the bay comes from the north or the south.  If you looked at the course for the PSA Overnight, you'd see we cross the bay four times: west to east, east to west, south to north and then north to south.  Because of this, there is always a long tacking leg in this regatta.  Oddly enough, we never had to tack on any leg of this course.  (Unless you count the bobbing around during the calm.)  The wind kind of circled around an we were either downwind or reaching the whole way.  How strange!


The last leg was a beautiful reach from Pooles Island Light to Baltimore Light on a moonless night.  The stars pierced the deep night sky and the breeze was strong and chilly.  It was great to hear an actual gun go off as we crossed the line in first!


The High Point competition continues!  Bring it on Argo!  :)


(Since it was dark, I'm not sure of the finishing order at this point other than our spot.) 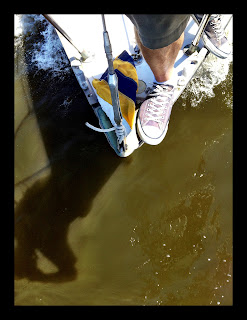 I still haven't been able to find a recent Green Book, but I swear the 2006 book on my boat said mark 'F' was Sandy Point Light. Which of course was why Argo let the fleet get around the first mark with a huge lead. We were fortunate to get the new breeze first and reset the race at G7.

Hat's off to LinGin's crew for working hard on the run to Craighill Light. The race was won on that leg.

Although the next two legs saw LinGin just plain faster than Argo. There were no tactics. Just reach from one light house to the next and LinGin was faster.

Someone asked if LinGin had more weight on the rail. From Tim's description that doesn't appear to be the case.

So it must have been better trim and better driving.

Congratulations to LinGin and her crew.

We really enjoyed the back and forth and look forward to more of it during the rest of the season. Hopefully there will be some tacking involved too!